Sometimes the things that happened in the bible can read like a modern day reality tv show. I enjoy taking stories from the bible and connecting them to the modern day world and below I highlight six things you won’t have to do for the right man with some biblical examples.

1. You won’t have to manipulate him: let’s just take it from the top with this example and start with Eve (Genesis:3). Technically the serpent or devil manipulated Eve and she in turn got her husband to eat of the fruit. Prior to this incident Adam was just chilling naming animals and going about his business. Granted he had a choice & wasn’t innocent, but he had some trust in Eve as his wife and partook of her offer. Look where that got Eve (and all women to follow) kicked out of paradise, painful childbirth and enmity between women and men!

As humans we can sometimes have a tendency to be manipulative, especially to get our way. But not only is this human characteristic unattractive and not fitting for a Christian, being manipulative will most likely backfire. Manipulation can come in many forms, through conversation, psychological, actions and even the way we dress. Women know that men are visual creatures, so don’t play the role of a temptress if you know he’s trying to live right! Yes, he should be able to control himself, but why try to purposely throw him off? Obtaining the affection of a man based on manipulation will ultimately fail because usually once he finds out, he will eventually recognize your manipulative tactics and take you for being a disengienuine person Tricking someone into being with you or doing what you want isn’t a great way to begin a relationship, but it is a sure fire way to end one!

2. You won’t have to lie about who you are: Lying goes right along with manipulation. Let’s look at the story of Leah (Genesis 29:21-35, Genesis:30). For me the story of Leah is a sad one, not only did her father have lie about who she was to get her married off, no matter what she did or how many sons she bore, Jacob would never love her the way he did Rachel. Although, she got what she wanted (marriage) it was far from a happy union for her.

Now today we aren’t totally hiding our faces from our grooms on the wedding day so he’s totally clueless. But we can still pretend to be someone else, even you choose to lie about little things like enjoying sports when you don’t know a red from a white sock or being deceitful about that meal you ‘cooked’ just for him while the take out boxes sit in the trash. Yes, there are so many worldly things that tell us we have to play this game and possibly tell little white lies to make him fall for you. But guess what, if you’re lying about who you are, he isn’t falling for you, he’s falling for the woman you pretend to be. Then you have to either keep up the charade or come clean about the reality of you, lying will always hurt the relationship in the end. You should feel comfortable and confident being yourself around a person you’re interested in. If you have to lie to keep someone’s interest, is it really worth keeping?

3. You won’t have to chase him: We’ve all heard that women are hunters and men like women who are aggressive in pursuit or she that chase down a husband findeth a good thing, right? No? Me neither. Ask any man, seriously ANY man and he will say he wants to pursue a woman not the other way around. Let’s look at Joseph and Potophers wife (Genesis 39). Potophers wife was all over Joseph the minute he stepped foot in Egypt. She literally chased him down, ripping a piece of his clothing! Nits pretty obvious to most that if you have to do all that to get a man, he don’t want you. It can be difficult waiting patiently for the man God has for you, which in Potophers wife’s case was her husband as is the case for you, God willing, you just haven’t met him yet. If a man really wants something or someone in his life he will go after his desire. We are ladies worth pursuit, so if you have to chase after him most likely he doesn’t want to be caught. Chase after God and if it be His will, the desires of your heart will undoubtedly be fulfilled.

4. You won’t have to abandon your values: This is a tough one for some of us, myself included. As someone that isn’t a virgin and struggles with remaining celebaite until marriage, I recognize that sexual sin can be a beast to conquer requiring much prayer and fleeing from temptation. In addition to sexual sin, there are a ton of other thing you shouldn’t have to bend on with someone worth having in your life including your walk with God, finances and your relationships with friends or family. The woman at the well (John 4) was in the predicament of having five ex-husbands and was in an unholy relationship with what I suppose would have been her boyfriend. After a talk with Jesus, she recognized or accepted the error of her ways and was changed from that day forward. We all need to have regular talks with Jesus through reading His word and not only recognizing but repenting of and correcting our actions when we step outside the value system set in place for us as Christians. I also recommend you decide what your core values are, jot them down, discuss them with your guy and if he can’t or won’t respect your them then you probably need to have a little talk with Jesus!

5. You won’t have to play second fiddle to another woman: This one is pretty much a no brainer for some, but for those that live in a world where being a side chick is all but glorified it remains a gray area. Take a look at the story of Hannah and Peninnah (1 Samuel 1: 1-7). Granted, during this time it was common to have many wives, but Peninnah reminds me of so many women that set out to hurt the other woman, by taunting her or taking pride in their position as the mistress. Peninnah tortured Hannah to the point of depression, but still Elkanah loved Hannah and always gave her more than he did Peninnah. Although she had Elkanah as a husband, she would never truly have his heart, as is the case in many love triangles.

In today’s society being a mistress is touted as an honor on television and in music lyrics, it’s common to accept (and enjoy) playing the role as it becomes more overt. But honestly, if you are dating someone that refuses to make you a priority why keep him around as an option? There’s no better feeling in a relationship than having a man that loves you and only you! Why sell yourself short? There should be nothing to make you accept a role as the other woman especially not money, material possessions, jealousy, lonliness or insecurities. Allowing yourself to be disrespected and used in this way speaks volumes about your own internal confidence.

6. You won’t have to force him to commit: Although I don’t have a specific example of a man not wanting to commit, I will use the story of Michal and David. (2Samuel 3:12-16). Yes, Michal loved David initially, but after years of not hearing from him she had moved on to her second marriage with Pal’ti-el. When David took her back, it was clear that she and Pal’ti-el were not easily parted. She seemed bitter and upset going forward with David, even to the point of scorning him. Usually forced commitments only breed resentment and inevitable unhappiness.

Unfortunately, in today’s world titles seem to be passé. Some men (and women) don’t want to put a label on a relationship and their partners are fine with it. Ultimately, the relationship remains in limbo and allows for easy outs and countless excuses, because hey if you never officially stated you were in a committed monogamous relationship it isn’t technically cheating. I’m not condoning these actions but it is how some people think. Even if a woman is in denial about it, we all know that if he wanted to be with her, he would make it known, not only to the woman but others as well!

Here’s to a PurposeFULL life!
Court 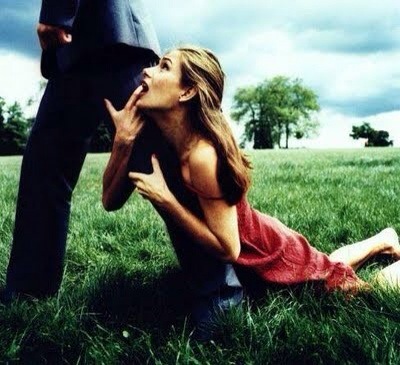