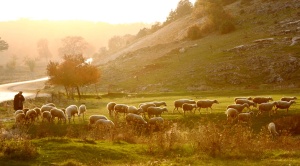 Most of us are aware of the fact that the bible teaches husbands to love their wives as Jesus loved the church, but I was really interested in delving into the deeper meaning.  Jesus made the ultimate sacrifice for us, he died so that we may have a closer relationship with God and bring us everlasting life.   So yes, husbands are supposed to die (both figuratively by dying to self daily and if need be literally) for their wives.  But there are other ways Jesus exhibited His love to people while here on earth below are a few ways I found throughout the bible.

1. Served: Jesus gave up everything to serve his sheep.  He performed miracles for them, healed the sick, literally gave life to the dead, washed feet and became the ultimate sacrifice so that we could have life through his death.

2. Cleaved:  Just as it states that a son will leave his mother and father and cleave to and become one with his wife we are the bride of Christ and we are to live in him and be one with him.  In the New Testament we see that he left the family he grew up with, his home town and went wherever he was needed for the church.

3. Pursued: Could you imagine if Jesus just sat idly by and waited for people to come to him before telling them the good news?  That was not at all Jesus’ style, He had a purpose and knew what he was here to do and waiting around for someone to come knocking on his door wasn’t in the plans.   He journeyed from land to land consistently spreading the good news to all that would listen.  In the book of Matthew, Jesus tells Simon and Peter to follow him, meaning they were to drop everything and go where he went.  Once it was time to be about his Fathers work, his ministry started he didn’t let look back and the pursuit started.

4. Taught: Jesus really did wash the church with the word.  He spoke in love and parables with the main goal of bringing them closer to God.  He showed them how to pray, reveled things to them through God’s words and left a road map for life just for us to live by.

5. Spoke with love: Even when Jesus was tired He wasn’t cruel or dismissive, he still took the time to explain things to His apostles and other members of his church.  He didn’t curse them out, spout of mean things and was never abusive to them.  There was no tit for tat played or retaliation planned. Can you even imagine if Jesus were the type to get even with people?!   We would all be in deep trouble!

6. Practiced patience: We see that Jesus had to teach the same things over and over, even using multiple parables to show the meaning of what He was trying to get across.  In Matthew 17:17 he asks how long must he stay with an unbelieving people, but even in exasperation he heals and patiently uses the opportunity as a teaching moment.

7. Prayed:  Even as he hung from the cross, Jesus prayed for the people who put him there.  There is no other way to put it than that is pure, undefiled, unconditional love!!!

8. Forgave: When everyone wanted to stone the woman who committed adultery Jesus was in the business of forgiving, he was quick to point out that none of us are without sin and that we shouldn’t condemn other’s because they sin differently.

9. Kept his word:  Although when Jesus was crucified the apostles and his followers were devastated to say the least and felt a little lost, he had told them that he would never leave them and that he was sending the Holy Spirit after he left earth.  He did just as he said he would.  Jesus was a man of his word, anything he promised we can rest assured that it will come to pass.

10.  Led by example:  Jesus didn’t just talk the talk, he walked the walk.  He showed the disciples how to pray and how to be godly men.  He was right there in the trenches leading the good fight.

11. Showed compassion: In Matthew 15:32 it states that Jesus had compassion for the people due to their hunger and in Luke 7 we see that he had compassion for a widow who wept over her only sons passing.  Jesus wasn’t an uncaring person who couldn’t empathize with others, he was a gentle leader that came to heal and enlighten those he loved.  He had feelings and showed it through his compassionate acts.

12. Put God first: Jesus knew when He needed quiet time away and to spend with His father solitarily and made it a point to retreat.  If he knew there were a bunch of people around he would wake up early to speak to God and avoid the crowds, although these were the people he was sent here to save he recognized the importance of keeping God first.  In Luke 5:16, it states that Jesus would withdraw often to be alone with God and pray.  He deliberately took time to connect with God and to seek His will and guidance so that ultimately, he could do what was righteous for the people he led.

Can you think of some other ways?  List them below

God bless, shine on and here’s to a purposeFULL life!

2 thoughts on “Love and parables: 12 Ways Jesus loved the church”